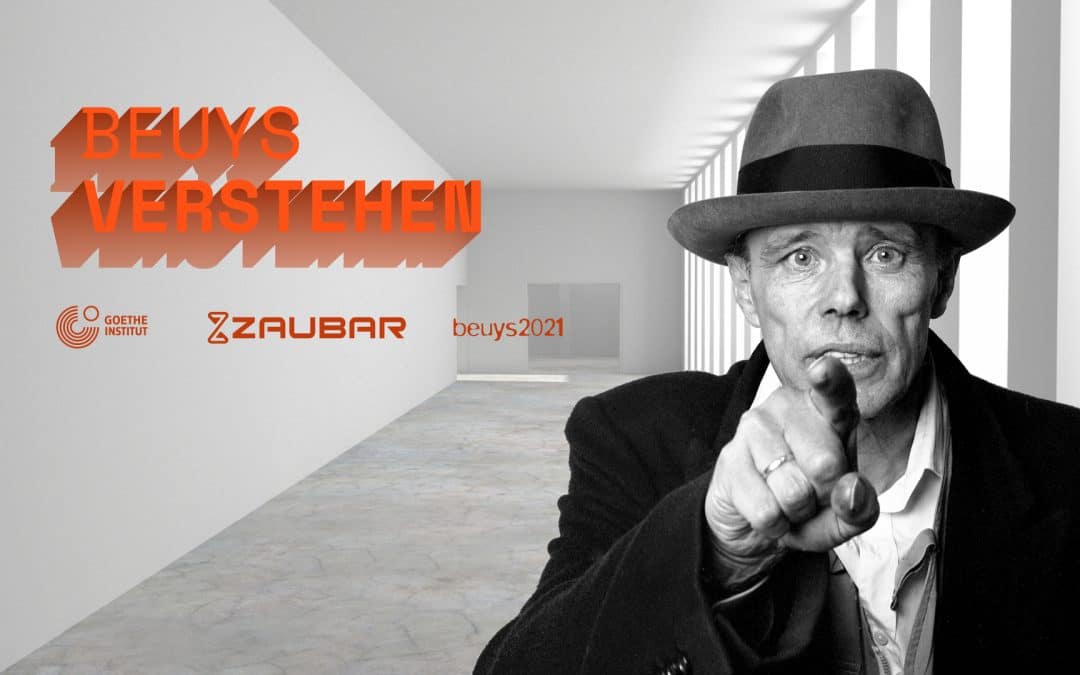 Corona, Lockdown, Closed Borders: To experience the work of one of Germany’s greatest artists despite closed museums, the Goethe Institutes in Warsaw and Prague, in collaboration with ZAUBAR, have prepared an immersive tour of Beuys’ work. On the web – and in AR, of course! 📱

This exhibition was curated by none other than the two chief curators Eugen Blume and Catherine Nicholson – the heads of Beuys2021 – the initiative that presents more than 16 museums in Germany in a major campaign bundled on Beuys’ birthday. 🏛

Beuys Verstehen is the name of the virtual gallery that aims to show how Joseph Beuys developed his “expanded concept of art” through eight iconic works. Users can learn about Beuys’ theory and practice of “social sculpture” and understand why he chose which objects and materials. Above all, however, the gallery deals with his life’s theme of “social transformation” and thus questions the topicality of the phenomenon of Joseph Beuys even beyond the centenary of his birth 🌍.

The virtual gallery Beuys Verstehen will be accessible in German and English from May 12, 2021 at:

At the end of May 2021, it will also appear on the websites of the Goethe-Instituts in Slovakia, Hungary, Lithuania and Slovenia.

Prof. Eugen Blume, curator and art historian, is one of the leading experts on the work of Joseph Beuys. Since his studies at the end of the 1970s, he has been dealing with his artistic work and activities. From 1993 he led the development of the Joseph Beuys Media Archive, and in 1995 he moved to Galerie Hamburger Bahnhof in Berlin, where he was director from 2001 to 2016. Since 2016, Eugen Blume has been curator of the Erich Marx Collection in Berlin and honorary professor in the Department of Art Studies at the Hochschule für Bildende Kunst in Braunschweig, as well as lecturer at several art colleges, for example in Stuttgart, Dresden and Leipzig. He is currently artistic director, together with Catherine Nichols, of the anniversary program beuys2021 in North Rhine-Westphalia, which includes several dozen exhibitions, actions, debates, workshops, and performances.

Dr. Catherine Nichols is an art and literature scholar, curator and author. Together with Eugen Blume, she curated the retrospective Beuys. Die Revolution sind wir (2008), Das Ende des 20. Jahrhunderts. The Best is Yet to Come (2013) and Das Kapital. Schuld – Territorium – Utopie (2016). She publishes regularly on contemporary art and has co-edited several books and catalogs, including Black Mountain. Ein interdisziplinäres Experiment (2015) and Bruce Nauman. Ein Lesebuch (2012). She is artistic director of the anniversary program beuys2021 and curator, with Eugen Blume and Isabelle Malz, of the exhibition Everyone is an Artist. Cosmopolitan Exercises with Joseph Beuys (2021) at K20, Kunstsammlung Nordrhein-Westfalen.

About the technical implementation of the project Beuys Verstehen:

Stefan Marx (CEO & Co-Founder of ZAUBAR).
“At ZAUBAR, we have been creating a platform to build and monetize immersive city, museum and art tours since 2019. It is important to us that it is as easy as possible to create tours and experience them in app and web. We place a high value on collaborating with outstanding cultural institutions and history-rich brands to establish the new format of location-based augmented reality tours.”

Fabian Mrongowius (Procducer ZAUBAR)
“The virtual tour ‘Beuys Verstehen’ allows all interested visitors to experience a central part of Joseph Beuys’ work in the most immersive way possible – despite closed museums. Our task was to make Beuys’ highly representational and conceptual works easily accessible in a simple but innovative format, even in the Corona year. Presenting Beuys’ work in new media, while maintaining its core, was also an exciting task personally. With ‘Beuys Verstehen,’ the collaboration with beuys2021, the Goethe-Institut and ZAUBAR brought together the right combination of professional expertise, cultural supports and technical know-how.”